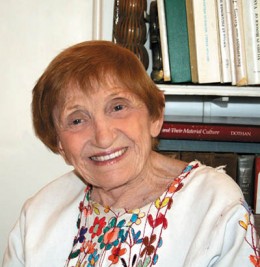 I suppose when most of us think of Trude Dothan, we remember her many contributions to the field of Israeli archaeology, especially her excavations at Athienou, Deir el-Balaḥ, and Tel Miqne-Ekron, and her ground-breaking publications on the Philistines. As for me, it’s Trude’s more personal nature that I recall, her friendship, her ability to relate to people, and her sense of humor.

I first became acquainted with Trude more than 55 years ago, and it was by accident, and I mean that literally. It happened when I was a student auditing courses in Hebrew literature and archaeology at the Hebrew University in 1959/60. As I heard that there was an archaeologist teaching an introductory course on pottery, a subject in which I was interested, I decided to sit in on that course. And so I came to the long seminar room at the old Institute of Archaeology on the Givat Ram campus, and took a seat at the end of the table. The teacher turned out to be Trude, who began the class by describing the character of Iron Age pottery types, and in the process, she started to throw sherds to each student sitting around the table. All of a sudden a sherd came flying my way, hit my head, and left a slight dent in my forehead. At that point, I decided that the study of pottery was too dangerous and immediately left the room, never to return again. Little did I suspect that 29 years later, when I had returned to Israel and took a position at the Albright Institute, Trude and I would meet again and decide to co-direct the excavations at Tel Miqne-Ekron.

During the next 30 years or so of working closely together with Trude at Miqne and on our publications, I came to appreciate Trude’s knowledge, experience, and the particular way in which she would try to win one of our ongoing archaeological arguments. It happened that I had excavated previously at Tel Gezer, which you could see off in the distance to the northeast of Tel Miqne.

During the pottery reading sessions at the dig, Trude and I would often argue about the identification and dating of a sherd, and for the most part, we either eventually agreed or agreed to disagree. However, when it came to identifying a sherd that I thought was Late Bronze Age and she thought was Iron Age, Trude would point to Tel Gezer and state emphatically, “Nu, Sy, BE’EMET, at Gezer that may have been Late Bronze, but at Miqne, it is Iron Age I.” Of course, Trude was delighted when it turned out to be Late Bronze, as one of the reasons she came to Miqne was in hope of finding the Late Bronze-to-Iron I transition in Philistia.

Trude also had a peculiar way of dealing with matters that she didn’t want to deal with. During the course of the dig, we had purchased an old VW van, and we did it in Trude’s name, as it was simply more convenient. As Trude didn’t have a driver’s license and in any case, didn’t know how to drive, on the weekends our major domo would take the vehicle home with him. After the dig, we sold the van and the following year I received a strange phone call from Moshe Dothan, who told me that he was looking through one of the desk drawers in the study he shared with Trude, and found more than 40 parking tickets in Trude’s name that were quite old and had accumulated over a long period of time. He had asked Trude about them, but since she didn’t drive and had no idea what they were, she had merely put them away in the drawer. Well, it turned out that our major domo had illegally parked on the weekends that he drove the van, and never told us about the tickets. As the car was in Trude’s name, and the tickets hadn’t been paid, the MISRAD HATACHBURAH eventually tracked down Trude, the owner of the car, and she was instructed to come to an office in Rehovot to pay for the tickets. At Moshe’s and my insistence, Trude went there and explained that she was not the guilty party, since she couldn’t even drive.

As only Trude could do, she managed to convince the PAKID in charge that she didn’t have to pay the accumulated amount of the tickets and the accompanying huge fine, and only paid a small penalty.

Trude and I often took turns lecturing at the various universities in the United States that supported the Miqne project. The year following Trude’s lecture at Lehigh Valley University, it was my turn to speak. My host had organized the lecture in a large hall, and when I entered the hall, I was pleased to find a full house, with people even sitting in the aisles because all of the seats had been taken—except for those in the first two rows, which were empty. I asked my host if these rows were reserved for special guests, and he replied no. They were empty because when they heard there was to be another lecture on the excavations at Tel Miqne, they remembered that in the first lecture, there was a woman who used a long sharp stick to point out features on the screen, and in the process of waving that stick around, literally wiped out the first two rows in the auditorium.

Yes, Trude had her own way about her, and there were so many shared experiences that reflect her unique nature, her joy of life, her infectious enthusiasm, and her passion for her work. Another member of the Israeli pantheon of archaeologists has left us, one who has had a profound impact on her family, her students, her colleagues, and her friends. And to Dani, Uri, and the Dothan family, you should know that Trude will be sorely missed. And as for me, I shall have lost an endearing partner whose presence will ever be with me, especially in the work to come in our joint Miqne publications.

May her memory be blessed.

Sy Gitin is the Dorot Director Emeritus of the W.F. Albright Institute of Archaeological Research. He gave this eulogy at Trude Dothan’s funeral on January 31st, 2016.